This is a "flagship product" of Airapport idle games. This game is all about mad science and exploration of steampunk worlds. The player starts in a workshop and all what is available at first is the ingenious money-making machine. Later on, as more income is gained, engines, cogwheels, pumps, mines and other gear becomes available. Once the workshop is fully equipped, a portal appears, which lets the player travel to other steampunk worlds: Clockwork City or Floating Islands. 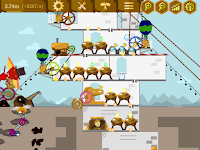 This is a spin-off of Steampunk Idle Spinner originally made to test the mechanics of "Assembly line". This concept proved to be interesting, and eventually some gameplay core functions were adopted by Steampunk Idle Spinner. This game is about building your own factory, equipping  it with money-producing machines, mining for coal, fueling steam engines and using all the possibilities to increase your revenue. Being the playground for game development experiments, the game is still in beta, but is going to be released in 2nd half of 2019 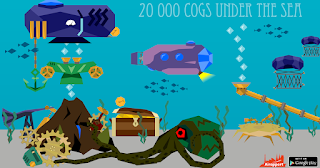 This is the second spin-off of Steampunk Idle Spinner, made in response to the community request, "to make underwater worlds like in the Jules Verne's adventures of captain Nemo". This game starts on the underwater base, and you must extract oxygen from the underwater volcano. As you expand, mechanical crabs and fish, octopuses and whales start helping you gain more oxygen and reach the water surface. You even have a chance to discover Atlantis Crystals, which will boost your engines.

To prove the capabilities of the game engine, it was used to make the supercasual linear idle game. In Idle Eaters you swipe the screen to feed various eaters: panda, robot, clown, gorilla, snowman and so on. As the eaters eat, you gain money. You can spend the money to upgrade the parameters of the eaters: speed, income, food multiplier. The game challenge is to define the optimal sequence of upgrades to reach higher levels faster,

Easter game about managing chicken farm and painting Easter eggs. Hen produce eggs, which roll down to the storage. The player controls the painting machines, which apply various patterns on the eggs. The colored eggs are priced higher than the regular eggs. Player can spend earnings to unlock new hen in fancy outfit.

Many players of Airapport interact in the social channels. They share their creations, discuss best strategies to maximize ingame revenue and propose new game ideas! Join the following platforms if you are looking to have more fun with the co-minded people:

Posted by Alexey Izvalov at 10:34 AM No comments: